It takes an entire day to get her to agree to speak to me. She has not met anyone outside of her small group of wrestlers for the last few days, refused all requests for a single quote, not stepped out of her room unless it’s absolutely necessary and doesn’t answer phone calls if they are not from her family or close friends. The Elite Sportspersons’ hostel at the Sports Authority of India Centre in Lucknow is a secure haven that has kept her away from all she wants to avoid — both people and things.

A freak injury during training has meant Vinesh Phogat, who was the favorite for a gold medal, no less, at the Wrestling World Championships at the end of October, has been ruled out of action for the next two months at the very least. It is a major blow to the 24-year-old’s hopes of ending the year where she started it — atop the podium. Given her form in the run-up to the competition, including a comprehensive win at the Asian Games, the frustration is understandable.

It is not easy being Vinesh Phogat. She has struggled for years to emerge from the shadows of her more-fancied cousins, Geeta and Babita. She has done it but struggled with injuries. The spotlight on the biggest stage for a wrestler was snatched from her just as she was preparing to bask in it — the Rio Olympics will be remembered, she admits, for what could have been till she twisted her knee during her quarterfinal bout.

Two years later, her dream of being a world champion has been crushed — yet again — by injury. This time, though, the anguish is a lot more given her growth as a wrestler in the interim, but it is tempered with a lot more understanding of her situation – and fate. “Rio se to mai hamesha har cheez ke liye prepared rehti hun (Ever since Rio, I am prepared for everything),” Phogat says, once she finally agrees to a quick chat.

The apprehension is only partly due to her injury; news articles about her personal relationships and her preference for foreign coaches have created avoidable attention. Phogat still refuses to meet in person, though — “I cannot even change my clothes without help and I don’t want anyone to see me in this condition” — and it requires a lot of assurance to get her to open up.

Once she does, she is willing to talk about herself. “I have accepted that some things are not in my control, whether injuries or anything else. Anything can happen. But I cannot keep brooding over what might have happened,” says Phogat. “It is better to plan for the future instead. I had a lot of hope of returning with a medal from the World Championships this time, but I will now try and use this time off to work on my shortcomings.”

This would have been Phogat’s fourth World Championships as a senior. A 10th place finish has been her best performance so far — in 2013 and 2017 — and it has taken an incredible amount of sweat, strength and broken bones to go from that to title favorite in the space of a year.

Wayne Lombard, the head of strength and conditioning at JSW Sports for the entire period that Phogat struggled after the 2016 Olympics, says she has come back a lot quicker than most mainly because of her mental strength. “It can take between six and nine months for even the most elite athletes to return after the kind of injury she suffered. Luckily for us, Vinesh is extremely strong mentally.”

“That helps because you go from training every day to not training at all and it is not easy. Especially for someone like Vinesh, who trains a lot harder than anyone else, it can be quite taxing. But we took time and went through, explaining to her what her limitations were and the process of healing,” says Lombard, who is currently the scientific advisor to the Indian women’s hockey team. 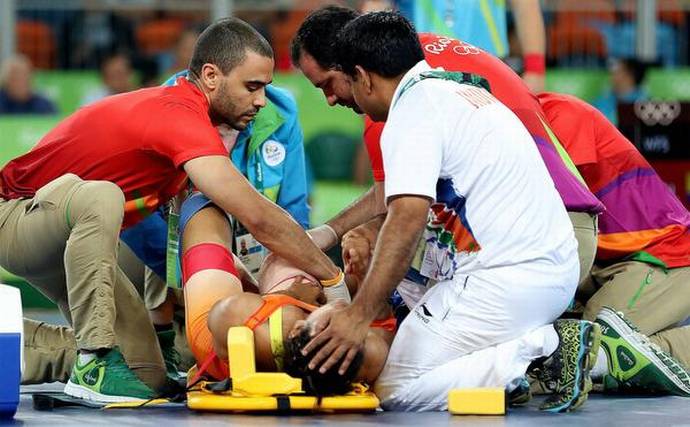 It wasn’t easy, though. Phogat had a posterolateral ligament complex tear in her knee — and it is every bit as serious as it sounds. Lombard explains that, unlike other common ligament injuries where only one or a few ligaments are torn, a PLC tear means practically every ligament in and around the knee is gone, making it impossible for her to do anything with that particular leg. “It is not just learning to walk again, I practically had to learn to crawl and understand what to do with the leg and the knee. It was an experience that was as informative as it was painful,” says Phogat. Her decision to not return home after the initial surgery and instead move to the JSW centre in Bengaluru was one of the toughest she has taken, but it is the right one, helping her utilise the state-of-the-art facilities and expert advice

from Lombard and the other support staff there, including physiologist Sandhya Silal. Her stay more than made up for the lack of emotional support that she would have gotten from her family, leading to an early recovery and a return to action at the Bharat Kesari Dangal at Ambala in March 2017.

“We started with the really basic stuff, but the whole plan revolved mainly around the mental part. What we try to do in such cases is to take it slowly. In the initial phases, the main task was to maintain her fitness, make sure there was not too much loss of muscle mass and very slight training. The aim is to reach a point where the athletes are stronger than they were before the injury. We had to make sure that, when she went into training, she was at a point where she would be able to handle anything the coach threw at her,” says Lombard.

Phogat’s struggles, in fact, have forged her strength of character. While it may be easy to dismiss her battles with a conservative rural Haryana society that continues to be steeped in patriarchy — Geeta and Babita, initiated into the sport by their father, Mahavir Singh Phogat, were the ones who braved the bulk of the taunts and jeers — it doesn’t account for her own fights both in and outside her family. Aside for the outside world that continues to put a premium on the male child, the battle for recognition and an indentity separate from her cousins was equally tough.

“That there are greater expectations from girls and we are being held up as role models in wrestling — a mainly male sport — is itself a huge ego boost. To know you have played a role, howsoever small it may be, is a great feeling. And the state’s support plays as big a role as the family’s,” says Phogat. But there is no running away from the dichotomy in Haryana — a state with one of the worst sex ratios in the country being a nursery for most of India’s champion women wrestlers.

Phogat insists there are girls from other states who are as good or even better than those in Haryana, but they lack government and financial support. Alka Tomar would agree. The Uttar Pradesh wrestler was the first Indian woman to win a medal at the World Championships, in 2006, but she is now a footnote in the country’s wrestling achievements, having failed to trigger a revolution the way the Phogat family has.

“You need infrastructure at the grassroots, but you also need heroes. Most of the districts in Haryana today have at least one big wrestler, which helps motivate youngsters. But, most importantly, girls need to stand up for what they want to do. It’s not just about sports — even otherwise, in education or in life, girls need to stop feeling pity for themselves or considering themselves weak. You have to have the strength of belief in yourself. The first step has to be taken by a girl herself; everything else follows,” says Phogat.

But it is easier said than done, and the wrestler herself is quick to admit there are times when she feels helpless despite all her achievements. “Whether you do well or badly, routine or out of the box, society will always find something to criticize you for. Some of the girls I studied with back in the village have now got married and I did not even know. When I go back home, I hear them saying their family doesn’t allow further studies or going out or doing anything independently. I feel bad and also helpless about what could I possibly do for them. But then I realize that all my words would be useless if they do not take the first step,” she says.

Talk veers back to wrestling and her injuries, and Phogat is glad to get back to speaking about what she can do something about. “Injuries are a part of the game, but it is definitely disappointing. My body and mind were both feeling good. The entire year had gone well. I had worked hard for this and a medal to end the year would have been perfect. But now the focus is to work on mistakes and areas of concern, get back to training quickly for the next year when qualifications for the Tokyo Games would start.”

Lombard insists there is nothing wrong with Phogat as far as her training or injuries are concerned, especially before big tournaments.

“She is one of the hardest workers out there, so there is nothing lacking or wrong with her per se. What is required is for those around her to manage her workload and train smart because Vinesh is someone who gives her 400 percent in both training and competition. She needs to be guided intelligently to avoid such injuries,” he says, echoing not just her coach Kuldeep Malik, but nearly everyone at SAI.

With the camp over, Phogat will be heading to Balali. It’s been two years since she spent more than a day with family, she says, and now is the best time to catch up on those lost moments, more so with her impromptu engagement to fellow wrestler Somvir Rathi after the Asian Games.

It’s nearly dinner time and Phogat decides she now wants to go back to the safety and comfort of familiar faces.