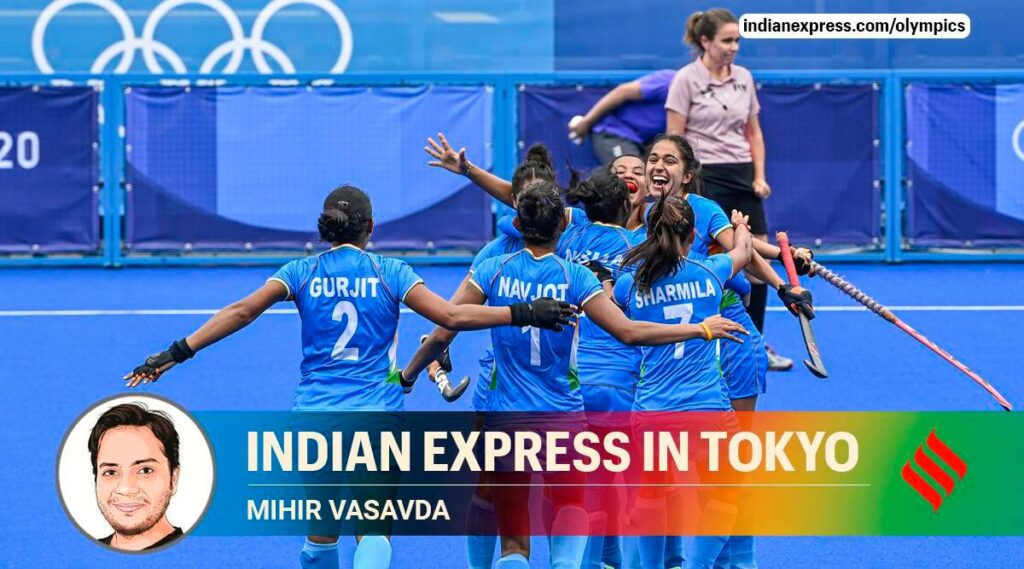 India were faster, stronger and, at fourth, finished higher on the classification table than any other women’s team in the last four decades. And the secret behind their dream run? Dollops of courage and shots of the humble gherkin-vinegar pickle.

“Literally, just raw pickles, nothing fancy,” said India’s strength and conditioning coach Wayne Lombard. “I don’t know how they came about it but someone randomly tried it, this was followed by a lot of research and it seems to work.”

India put up a gallant fight in the bronze medal playoff match but lost 3-4 to Britain. But once again, they showed how much they have improved during this Olympic cycle, running relentlessly, weaving a web around their opponents with some intricate passing and tiring them out.

Chief coach Sjoerd Marijne credited Lombard for a lot of this. “He has worked incredibly hard to improve the team’s fitness,” Marijne said. “Without that, it would have been tough for us to execute our plans.”

And the South African relied on his extensive research on pickle juice. There have been multiple studies, Lombard said, which suggest pickle juice relieves muscle cramps. The vinegar, he said, triggers a reflex that alerts a player’s brain to tell their muscles to stop contracting and relax. Thus, muscle cramping is reduced as soon as the vinegar touches receptors in the mouth.

The first time Lombard used it with the Indian team was during the tour to Argentina in January this year, which was the first international series in almost a year owing to the pandemic. During that tour, a player suffered cramps, which was largely a non-issue for the Indian players until that point.

“I had known about pickle juice (and its effects) for a while so we got one and popped straight away,” Lombard said.

So, when the players were packing their bags for Tokyo, Lombard was busy shopping for pickles, the ones with gherkin, vinegar. “There are two ways to consume it. You either have it as a shot or you can gargle so your membranes get it and then you spit it out,” he said.

He carried roughly 100 shots to Tokyo. “When it was back-to-back games, the girls would drink that after breakfast, or depending on when the game was. And then, at the onset of cramps they would have additional shots if required,” he said.

The trick worked. There was not even a single incident throughout this campaign when an Indian player suffered cramps despite most of their matches being played during day time, when the conditions were always sultry.

And it was evident once again on Friday, when the conditions for the bronze medal playoff were unforgiving: almost 40 degrees on the pitch side, sun blazing down, dry heat and no wind. It was so hot that the players, for the first time, were given a couple of minutes break in between the 15-minute quarters so they could keep themselves hydrated.

After the game, Prime Minister Narendra Modi, in his phone call to the entire team, would mention the sweat that the team had let drip on the Tokyo astro-turf all through the tournament.

“Aapka paseena padak nahi la paya, par desh ki karodon betiyon ki prerna ban gayi hai (Your sweat could not get a medal but it has become an inspiration for crores of daughters of the country),” he said.

India, a team that was so unfit in Rio five years ago that it sometimes seemed that they played their matches in slow-motion, dug deep, pressing for an equalising goal.

On the flanks, Salima Tete tirelessly darted forward every time she got the ball on the flanks, gliding on the field and leaving the British in her wake. Upfront, Lalremsiami puzzled the rivals with her smart, quick movements. Neha Goyal, not the tallest on the field, snuck behind the defence line frequently with her short, fast steps.

And each time they outran their opponents, Lombard allowed himself a satisfied smile.

“When I first arrived and saw the profile of the players, I thought there is a lot of work that needs to be done,” he said. But once they bought into his ideas, the transformation was radical. It wasn’t anything eye-catching, just days and weeks of basic, boring work in the gym, on the field and off it, monitoring everything from what they ate, how much they slept and how they felt physically and emotionally.

The results within a couple of years were fascinating. “For example, the yo-yo test numbers when I first came were probably averaging around 16 or 17. Now, it is 19, 20, 21… Our fittest girl ran a 22, 23. That’s some serious running,” said Lombard, who has worked with several other Indian athletes, including wrestler Vinesh Phogat.

Fitness, more than anything else, has been the hallmark of this Indian team. It became even more significant given that they hadn’t played a competitive game of this level since the Olympic qualifiers took place in November 2019 — unlike the Europeans, who played in their continental championship just before the Olympics, or Australia and New Zealand who competed against each other.

Almost everything was stacked against the Indians, including the draw which pitted them against the podium finishers of the Rio Olympics in their first three games.

“We knew we had improved on the technical aspects. We knew we were very fit. But we were kind of going blindfolded into the Olympics because we hadn’t played a proper match in more than a year,” Marijne said. “So we didn’t know what would happen.”

What happened was India surprised the hockey world with their speed and skills. Marijne, the architect of it, said he will move on as he had decided before the Olympics. He is set to be succeeded by the team’s analytical coach Janneke Schopman, who now has a solid base to work with.

And Lombard, of course, will be there doing his thing. “But before that, the girls will take a proper break,” he said. “They deserve it.”